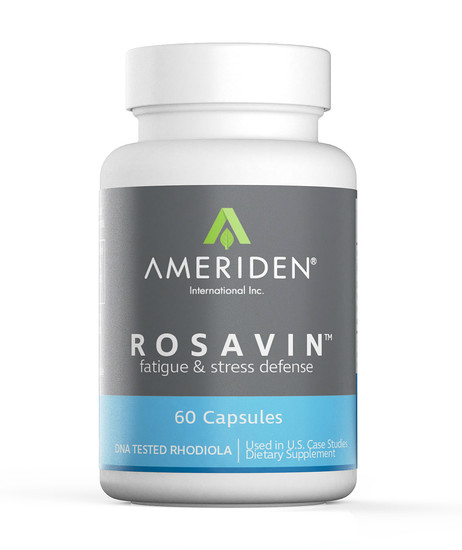 The Original -Since 1997 - Nothing is pure and perfect until it is perfectly pure like Rosavin™, a compound from the Rhodiola rosea plant.

Touted as the Herbal Superstar of the 21st century, Rosavin is a true adaptogen that helps your body deal with emotional and physical stress.

Here are the Benefits of Rosavin™, from the Rhodiola rosea plant:

Rosavin™ is the original powerful Siberian Rhodiola rosea extract product first introduced to the United States in 1998. Extensively used in case studies by U.S. doctors, it is also supported by over 55 years of clinical studies in Europe and Russia.

Men and women agree Rosavin™ is the best kept secret in years to naturally promote mental wellness, stamina, and energy! Get purity and better overall health with this amazing product from Ameriden®. The Rhodiola rosea plant is only harvested after a minimum five-year root growth, and then is water extracted and freeze dried to preserve the precious biologically necessary key actives standardized to 3% Rosavin and 1% salidroside.

The Rhodiola rosea plant has been extensively studied in Russia and Scandinavian countries for over 35 years and is categorized as an adaptogen because of its ability to increase resistance to chemical, biological, and physical stressors. Rhodiola rosea extract has been found to inhibit stress-induced depletion of important brain neurotransmitters. The adaptogenic properties of Rhodiola rosea extract are attributed primarily to this ability to influence the levels and activity of neurotransmitters and the amino acids that mimic the effect of opiates in the brain, such as the beta-endorphins. Because it is an adaptogen, Rhodiola has the potential to normalize neurotransmitters in the central nervous system without causing drowsiness or fatigue. In other words, it helps maintain normal levels of brain chemicals but, when they are already normal, Rhodiola will not further affect them.

You need a brand you can trust. Ameriden® was first in bringing Rosavin™ to the professional market in 1998. Rosavin™ is the only standardized brand used extensively in U.S. case studies. Newsweek, Woman's World, Science News and even Dr. Oz on Oprah have shared with their readers and viewers the benefits of Rhodiola rosea extract. Many are saying Rosavin™, highly purified Rhodiola rosea; has also helped their love life. How does this all occur? Adaptogens balance the neurotransmitters in your brain.

Supplement Facts
Serving Size: 1 Capsule
Servings Per Container: 60
Directions: For Adults, as a dietary supplement, take 1 capsule in the morning before food and 1 capsule in the early afternoon 1 hour after eating or as directed by your Health Care Professional.

Rosavin ™ capsules do not contain any animal by-products.

Usage requirements may vary and should be individualized.

WARNING: If you are pregnant, do not use without first consulting your health care professional.

ALLERGENS: This product does not contain any known allergens.